Lawmakers push to phase out plastics that can’t be recycled

Bill would bar the sale of such items by 2030 and reduce amount sent to landfills. 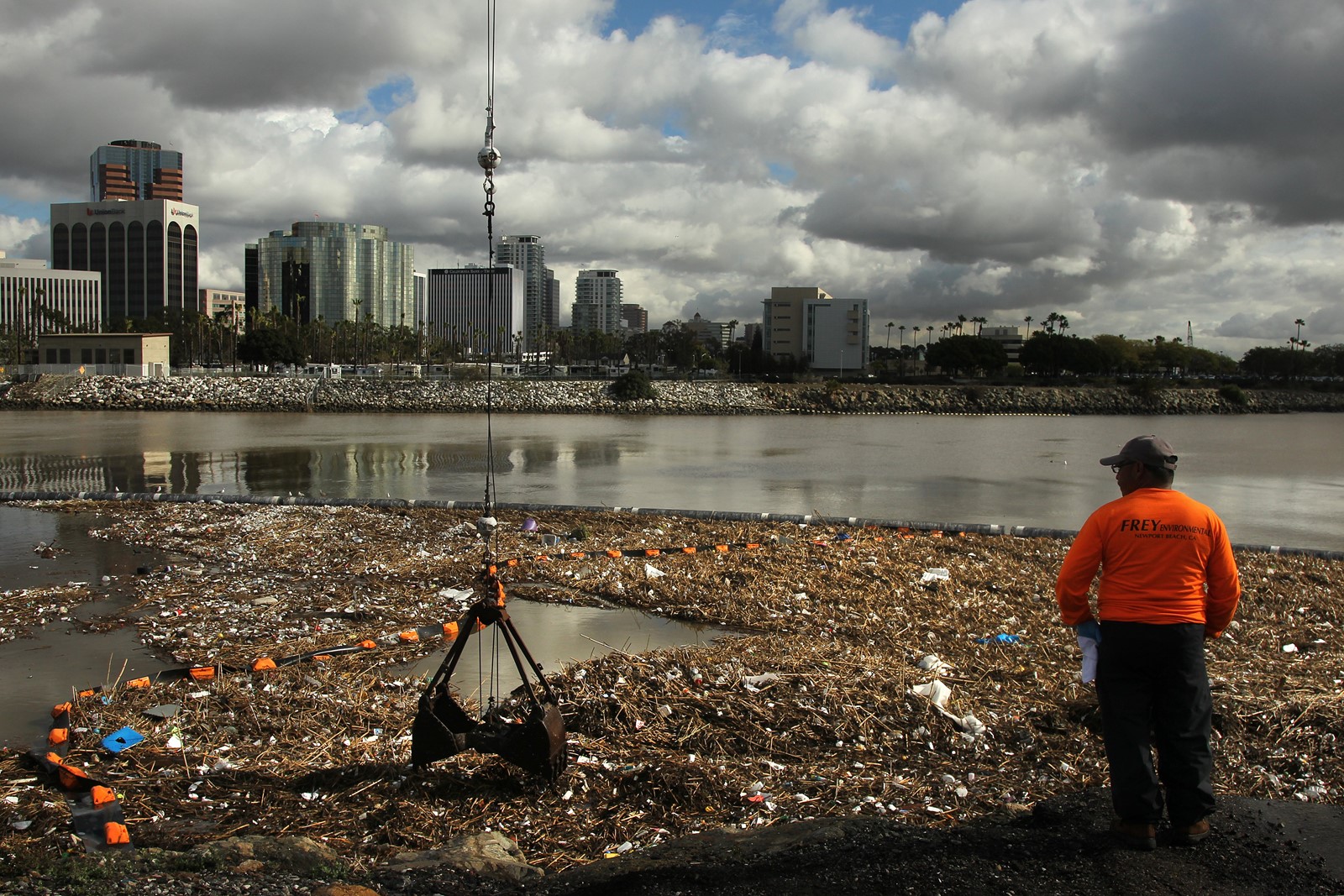 WORKERS REMOVE trash and debris from the mouth of the Los Angeles River in 2015 after heavy rains. Local governments in California spend an estimated $420 million a year to clean up plastic, lawmakers said. (Photographs by Rick Loomis Los Angeles Times) 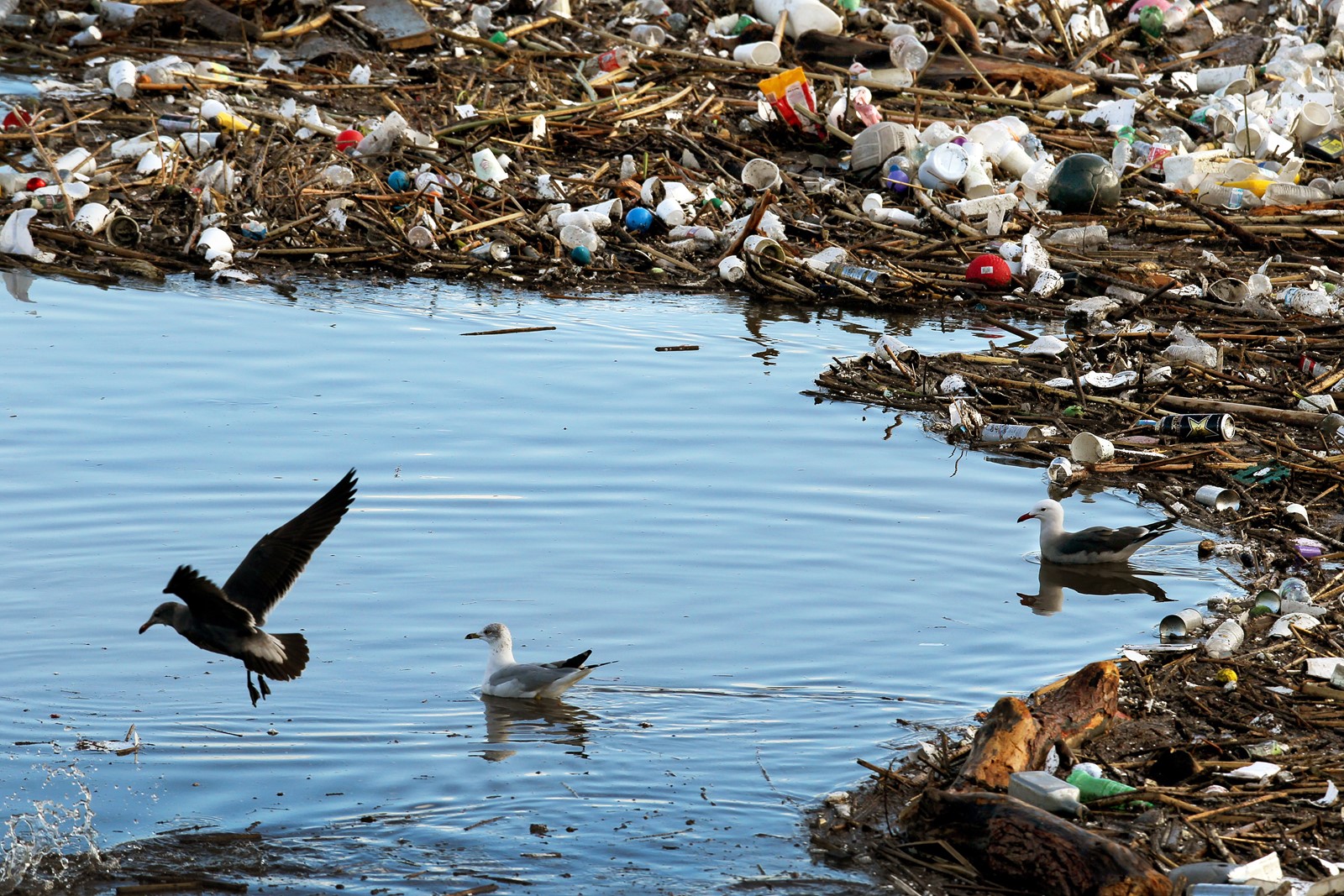 SACRAMENTO — With Californians already barred from getting plastic straws in many restaurants unless they request them and grocery stores not providing single-use plastic bags, state lawmakers are again proposing to ramp up efforts aimed at significantly reducing products that are not recyclable, including plastic cups, forks, spoons and packaging.

New legislation announced last month would require plastic and other single-use materials sold in California to be either reusable, fully recyclable or compostable by 2030. The measure would also require the state to recycle or otherwise divert from landfills 75% of single-use plastic packaging and products sold or distributed in California, up from the 44% of all solid waste that was diverted as of 2017.

“We have to stop treating our oceans and planet like a dumpster,” said Assemblywoman Lorena Gonzalez (D-San Diego), an author of the proposal. “Any fifth-grader can tell you that our addiction to single-use plastics is killing our ecosystems.”

The measure, coauthored by state Sen. Ben Allen (D-Santa Monica), directs the state Department of Resources Recycling and Recovery to develop a plan in the next two years for meeting the goals.

The American Chemistry Council, which has been a leading voice for the plastics industry at the Capitol, wants to review the specific language of the proposed legislation before taking a position, spokesman Tim Shestek said in an email.

But, he said, the council shares the proposal’s objective of significantly reducing the amount of plastic going to landfills, “consistent with the goals we set last year that 100% of plastics packaging is re-used, recycled or recovered by 2040 and that 100% of plastics packaging is recyclable or recoverable by 2030.”
Shestek noted that the council last year supported a bill by Allen that created new requirements that food service packaging used at state facilities be recyclable or compostable.

The latest push follows last year’s approval of a first-in-the-nation state law barring restaurants from providing plastic straws unless they are requested by customers.

It also builds on a law approved by the Legislature in 2014 that made California the first state to prohibit stores from using single-use plastic bags. Stores must offer paper and reusable plastic bags for at least 10 cents each.

Allen said annual global plastic production is rising and now totals 335 million tons. The United States, he said, discards 30 million tons a year.
The national recycling rate for plastic is projected to drop from 9.1% in 2015 to 2.9% this year, according to the U.S. Environmental Protection Agency and other sources, Allen said.

He said California only recycles 15% of single-use plastic in part because the cost of recycling plastics exceeds the value of the resulting material.
“We can’t keep ignoring the public health and pollution threat posed by mounting plastic waste,” Allen said. “Every day Californians generate tons of non-recyclable, non-compostable waste that clog landfills, rivers and beaches.”

Microplastics are showing up in drinking water consumed by humans, and plastic pollution is harming sea life and costing taxpayers, state officials said. Local governments in California spend an estimated $420 million a year to clean up plastic.

“We have technology and innovation to improve how we reduce and recycle the plastic packaging and products in our state,” Gonzalez said. “Now, we have to find the political will to do so.”