For the first time in 75 years, the nation sent more overseas than it imported last week. 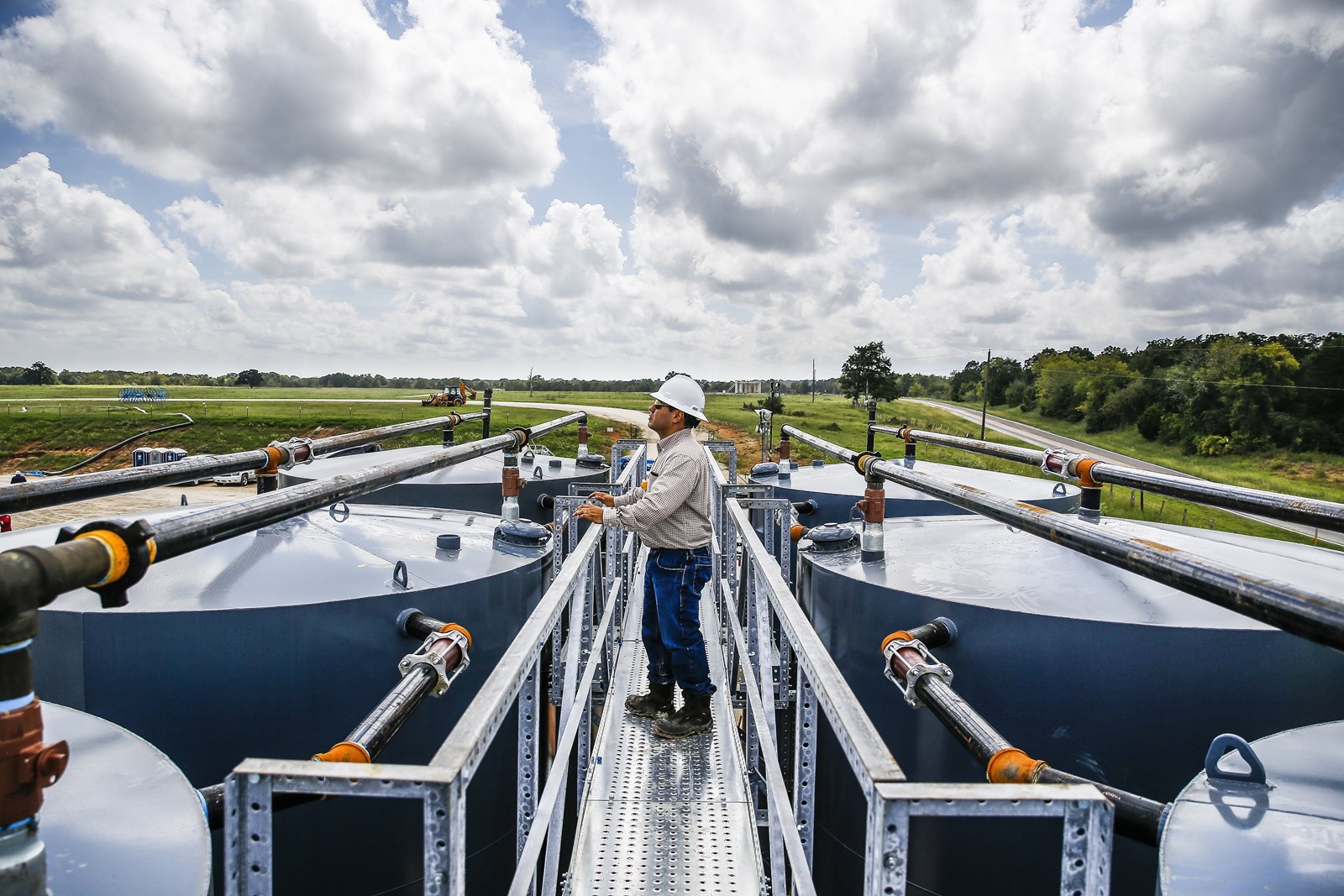 THE SHIFT to net oil exports is the result of an unprecedented boom in U.S. oil production. Above, Romel Gonzales at a fracking site in Caldwell, Texas. (Michael Ciaglo Associated Press)
BY JAVIER BLAS,
SALMA EL WARDANY
AND ELENA MAZNEVA

The United States turned into a net oil exporter last week, breaking 75 years of continued dependence on foreign oil and marking a pivotal — though likely brief — moment toward what President Trump has branded as “energy independence.”

The shift to net exports is the dramatic result of an unprecedented boom in U.S. oil production, with thousands of wells pumping from the Permian region of Texas and New Mexico to the Bakken in North Dakota to the Marcellus in Pennsylvania.

The country has been heading in that direction for years, but this week’s dramatic shift came as data showed a sharp drop in imports and a jump in exports to a record high. Given the volatility in weekly data, the United States is likely to remain a small net importer most of the time.
“We are becoming the dominant energy power in the world,” said Michael Lynch, president of Strategic Energy & Economic Research. “Because the change is gradual over time, I don’t think it’s going to cause a huge revolution. But you do have to think that OPEC is going to have to take that into account when they think about cutting.”

The shale revolution has transformed oil wildcatters into billionaires and the United States into the world’s largest petroleum producer, surpassing Russia and Saudi Arabia. The power of OPEC has been diminished, undercutting one of the major geopolitical forces of the last half a century. The cartel and its allies are meeting in Vienna this week, trying to make a tough choice to cut output and support prices, risking the loss of more market share to the United States.

On paper, the shift to net oil exports means that the United States is today energy independent, achieving a rhetorical aspiration for generations of American politicians, from Jimmy Carter to George W. Bush. Yet it’s a paper tiger achievement: In reality, the United States remains exposed to global energy prices, still affected by the geopolitics of the Middle East.
Although the net balance shows the United States is selling more petroleum than it is buying, American refiners continue to buy millions of barrels of overseas crude and fuel each day.

The United States imports more than 7 million barrels a day of crude from around the globe to help feed its refineries, which consume more than 17 million barrels a day. In turn, the nation has become the world’s top fuel supplier.
“The U.S. is now a major player in the export market,” said Brian Kessens, who helps manage $16 billion at Tortoise in Leawood, Kan. “We continue to retool our export infrastructure along the Gulf Coast to expand capacity, and you continue to see strong demand globally for crude oil.”

Meanwhile, in Vienna, OPEC ended talks Thursday without a deal on oil production cuts for the first time in nearly five years as Russia flexed its muscles by so far refusing to commit to the big output curb that Saudi Arabia is demanding.

After two days of talks, Saudi Energy Minister Khalid al-Falih said he isn’t confident that there will be an agreement when the Organization of the Petroleum Exporting Countries meets again with its allies Friday. A proposal for a combined OPEC and non-OPEC cut totaling 1 million barrels a day was left dangling in uncertainty.

“Not everybody is ready to cut equally,” al-Falih told reporters. “Russia is not ready for a substantial cut.”
The failure to secure a deal is the latest example of how OPEC is under pressure from forces that are redrawing the global oil map, leaving it increasingly dependent on the support of non-member Russia.

Much has changed for OPEC since 2016, when Russia and Saudi Arabia ended their historical animosity and started to manage the market together. The alliance has transformed the cartel into a duopoly in which the Kremlin is asserting its power.

As ministers sat down at OPEC headquarters, Russian Energy Minister Alexander Novak flew to St. Petersburg to meet with President Vladimir Putin to decide on their country’s contribution. If the group’s most important partner in the OPEC+ alliance decides to make a sizable cut, the cartel would follow up.

“The impression that the group can’t really come to a decision without first checking with Moscow is going to be difficult for some members to swallow,” said Derek Brower, a director at consulting firm RS Energy Group. “The market won’t care if tomorrow they manage a sizable cut with proper metrics, but that’s still a big if.”

Saudi Arabia wants a moderate cut in production that wouldn’t “shock the market.” The kingdom is under economic pressure after a collapse in oil prices last month, yet it’s seeking to walk a fine line between preventing a surplus next year and appeasing the U.S. president. Trump doesn’t want production cuts, as he sees low oil prices as key to sustaining U.S. economic growth. He has taken to using his Twitter account to berate OPEC’s policies.

Although Middle Eastern producers need high oil revenues to pay for government spending, sensitivities are different in Russia, which is running a budget surplus and benefits from a weak ruble that mitigates the effect of lower crude prices in dollars. The government is concerned that higher prices for consumers would stoke discontent with economic policy, according to one Kremlin official.

Another sticking point in the talks was Iran’s contribution, a delegate said. The Persian Gulf nation is subject to U.S. sanctions and as such won’t participate in any curbs, Oil Minister Bijan Zanganeh said. Other members said it should participate, a delegate said.
Blas, El Wardany and Mazneva write for Bloomberg.
You must log in or register to reply here.
Share:
Facebook Twitter Reddit Pinterest Tumblr WhatsApp Email Link
Top