U.S. plastic waste is piling up in Southeast Asia 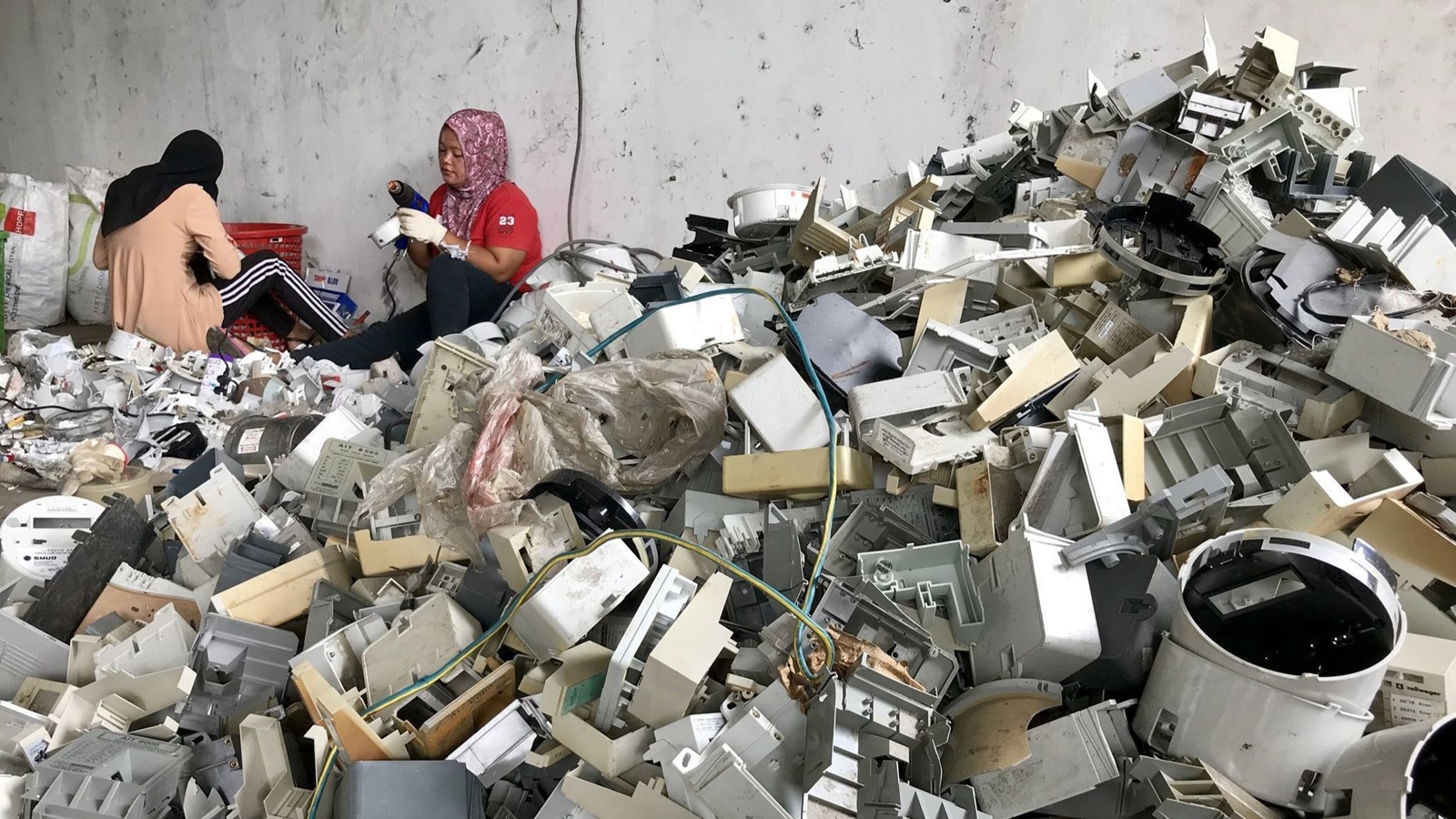 WORKERS in Port Klang, Malaysia, process U.S. plastic discards. After China banned nearly all imported plastic waste, much of it has ended up in Malaysia. (Shashank Bengali Los Angeles Times)

BY SHASHANK BENGALI
PORT KLANG, Malaysia — In a derelict warehouse complex plastered with “For Rent” signs an hour from the Malaysian capital, four women squatted on upturned buckets. Their fingernails were cracked and nubby, their head scarves dampened with sweat.

Wielding hair dryers, they heated and peeled labels from a waist-high pile of discarded plastic electric meters. The stickers affixed to each of the plastic round gray casings bore the sun-like logo of a faraway power company: the Sacramento Municipal Utility District.
How scrap from California ended up in a junkyard 8,500 miles away, broken down manually by workers earning $10 a day, is the story of the reshaping of the global garbage and recycling system.

For three decades the United States and other industrialized nations have shipped most of their plastic waste overseas — primarily to China, where cheap labor and voracious factories dismantled the scrap and turned it into new plastic goods.

But 12 months ago, China banned nearly all plastic waste imports amid concern that emissions from processing were harming the environment. Many scrap dealers rerouted their cargo to smaller recyclers in nearby Southeast Asian countries, which were suddenly overwhelmed by tides of foreign refuse.

Malaysia became the top destination for U.S. plastic waste, importing more than 192,000 metric tons in the first 10 months of 2018 — a 132% jump from the year before, according to federal government data. Thailand took in more than four times as much American plastic as it did in 2017, Taiwan nearly twice as much.

These and other countries have since announced restrictions on new plastic waste imports, but factories are struggling to handle what’s already arrived. In Klang and Kuala Langat, drab industrial districts close to Malaysia’s busiest shipping hub, giant sacks overflowing with old soda bottles, desktop phones, laptop shells and fan blades have piled up in warehouses and abandoned lots.

“They have become a dumping ground,” said Heng Kiah Chun, a Malaysia campaigner for the environmental group Greenpeace.
“Even before the China ban, Malaysia struggled to deal with its domestic waste. It has no capacity to handle waste from other countries.”

The problem in Malaysia is not the inflow of so-called clean plastics — like the electric meters — which are crushed into pellets and resold to manufacturers, mostly in China, to make cheap clothing and other synthetic products.

It is the large quantities of low-grade scrap — soiled food packaging, tinted bottles, single-use plastic bags — that China has rejected, and that requires too much processing to be recycled cheaply and cleanly.

Most of it has ended up in landfills or openly incinerated in violation of local laws, according to residents and environmental groups.
One night in February, residents in Jenjarom, a town southwest of the capital, Kuala Lumpur, awoke to a pungent chemical smell and fumes that provoked hacking coughs.

Some attributed it to the periodic air pollution Malaysia suffers when farmers burn crops in neighboring Indonesia. But Pua, a chemist, knew better.. Over the next several weeks, she and a few others traced the smell to a growing number of factories that had cropped up on the outskirts of the town of 30,000 and were taking in truckloads of plastic.

Some of the crude facilities were tucked into oil palm plantations or surrounded by walls of tin sheets. Others made no effort to evade notice.

Driving home from dinner one evening in June, Pua saw smoke rising from a large plant right along the highway — and was hit with that same noxious odor.

“They were doing it every day,” she said. “We felt helpless.”

By then, she and a handful of other volunteers had already counted approximately 50 recycling plants in the area, many of which did not appear to have government permits to handle waste.

The activists rented a drone to fly over the facilities and capture pictures. Donning chemical-grade gloves, Pua collected water samples from sites where recyclers were believed to have dumped chemicals used to wash contaminated plastic. Tests found the samples contained high levels of toxic metals.

In July, after months of ignoring her complaints, local officials shut down 34 illegal recycling plants in Kuala Langat, prompting a national outcry that resulted in a three-month pause on new plastic waste imports. About 17,000 metric tons of waste was seized, but is too contaminated to be recycled. Most of it is likely to end up in a landfill.

News reports said many of the unlicensed factories were run by Chinese nationals who had shifted their operations to Malaysia because of the ban in China.

Some ignored the new restrictions in Jenjarom and resumed operations a few days later. One threatened Pua and her colleagues, texting her that there was a bounty of 100,000 Malaysian ringgit — about $24,000 — “to revenge ur guys.”

Others relocated to places like Klang, where dozens of factories operate with little apparent oversight.

The impunity raised suspicions that some unlicensed importers had bribed customs and enforcement authorities to look the other way.

“The previous government was very supportive of China, so some companies found their way in outside the proper channels,” said Sri Umeswara, a consultant for the plastic recycling industry, based in Kuala Lumpur.

Some recyclers said the unlicensed companies were merely capitalizing on a business opportunity.
“Rubbish is money,” said Vincent Cheong, a tall, genial 50-year-old overseeing a simple — but legal — recycling operation in a warehouse whose white walls were pocked with holes.

The Sacramento electric meters arrived there in mid-November, soon after Cheong set up his business, buying and dismantling hard plastic scrap.

With one crusher and a dozen workers, he could generate about two tons of plastic shards a day to be trucked to northern Malaysia, refined into pellets and sold to a Chinese dealer in Shenzen.

“It’s a good business for us, trying to help the environment,” Cheong said. “But I don’t know why the U.S. doesn’t take care of its own rubbish.”

To environmental groups, the plastic waste crisis illustrates a breakdown in the global recycling system, which for years had been propped up by China’s enormous appetite for scrap. Still, a study last year found that only 9% of the 83 million metric tons of plastic ever produced globally has been recycled, while 79% has ended up in landfills and 12% incinerated.

Countries like Malaysia can’t come close to filling the gap left by the Chinese ban and are facing increasing domestic pressure not to be the world’s dump.

The new government of Prime Minister Mahathir Mohamad has promised to protect the environment, pledging to eliminate all single-use plastics by 2030.

At the same time, rules are being finalized for a partial ban on plastic waste imports that will reportedly allow only uncontaminated, easily recyclable waste from industrialized countries.

Activists in Jenjarom said there was a contradiction in buying foreign scrap while calling for an end to domestic plastic use.

“For all these years developed countries relied on China to recycle their plastic, so they didn’t care,” Pua said. “Now China is trying to take care of its pollution problem, so the burden is shifting to us. But recycling is a myth. The root cause of the problem is we are too dependent on plastic.”