A Description of Critical Tipping Points


Imagine cutting down a tree. Initially, you chop and chop … but not much seems to change. Then suddenly, one stroke of the hatchet frees the trunk from its base and the once distant leaves come crashing down.

It’s an apt metaphor for one of the most alarming aspects of climate change – the existence of “tipping elements.”

These elements are components of the climate that may pass a critical threshold, or “tipping point,” after which a tiny change can completely alter the state of the system. Moving past tipping points may incite catastrophes ranging from widespread drought to overwhelming sea level rise.

Which elements’ critical thresholds should we worry about passing thanks to human-induced climate change?

You can see the answer on this graphic – and find more information below. 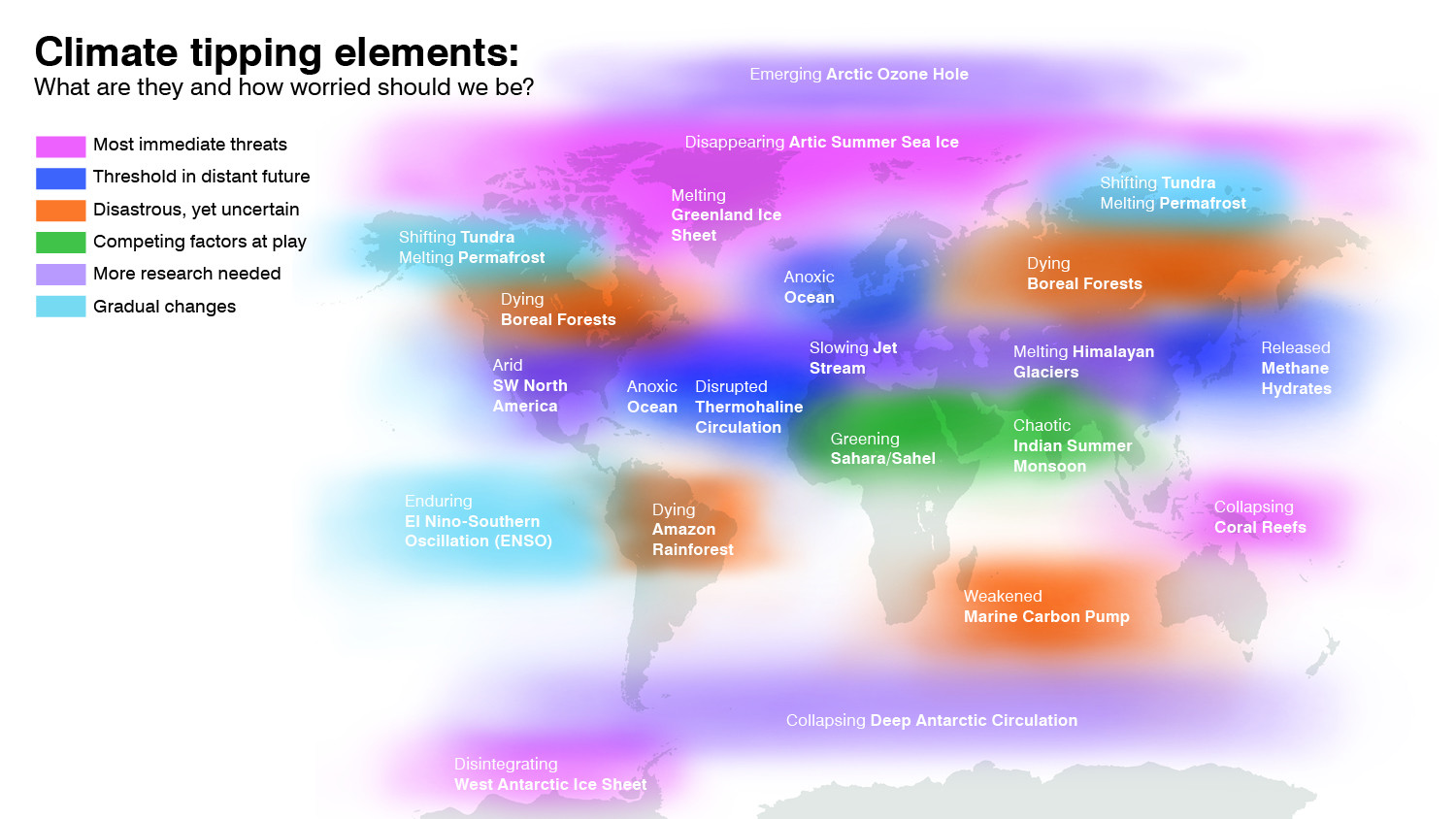 Image: EDF
The most immediate and most worrisome threats

Tipping points in the distant future

With a range of critical thresholds on the horizon, each tipping element demonstrates the potential implications of allowing climate change to progress unchecked.

As tipping points loom ever closer, the urgency for emissions mitigation escalates in hopes of sustaining the Earth as we know it.

I have always conflated tipping points with feedback loops, the point where the warming dynamic is beyond human control? For instance, methane release from perma-frost. Is that a separate phenomenon?
D

"I have always conflated tipping points with feedback loops, the point where the warming dynamic is beyond human control? For instance, methane release from perma-frost. Is that a separate phenomenon?"​
The phenomena of feedbacks and tipping points are related but they are not the same. The notion of a tipping point signifies irreversibility in a certain sense (like a mathematical concept called "hysteresis"), whereas feedbacks (both positive and negative) do not. Below are some excerpts to help explain these notions from my ebook, which may be freely downloaded here.

The current unprecedented rate of greenhouse gas emissions into the atmosphere is the primary driver of climate change on Earth, but because the climate system is complicated, many other factors must also be taken into account. As the planet warms, the climate system responds in many different ways. One important type of response is called a feedback.

For example, as the planet warms, more water evaporates from oceans and lakes. Because the water vapor in the air is also a greenhouse gas, the planet is warmed further by this evaporation, which causes even more evaporation and therefore more warming. is is an example of a positive feedback, positive because the warming is reinforced.

Another example is the ice-albedo feedback. Albedo is a number between zero and one. It measures the fraction of light re ected from a surface. A white colored surface has an albedo that is almost 1, because it re ects most of the incoming incident light. Dark colored surfaces absorb most of the incident light and are heated by that absorbed light. Very little of the light is re ected back, so a dark surface has an albedo that is nearly zero.

You can feel how this works on a sunny day. Stand barefoot on a white sidewalk, and then step onto the black asphalt on the street. It will feel much hotter. The light colored sidewalk has a high albedo because it reflects most of the light and stays cool, but the dark asphalt reflects very little light (that’s why it’s dark!) and instead absorbs the light and turns it into heat, and then also radiates invisible infrared light.

Arctic ice has an albedo even higher than a sidewalk. It reflects sunlight back into space and helps to keep the planet cool. But as the planet warms up from greenhouse gases, ice melts, and the ground or dark sea water underneath absorbs more sunlight and heats the planet. That in turn causes more ice to melt which heats the planet more. This is another example of a positive feedback.

There are other positive feedbacks and also negative feedbacks. For example, as the planet warms evaporation increases, as discussed above, but the moisture in the air can become part of a cloud which reflects incoming sunlight back into space because of its high albedo.

Imagine an egg sitting on a table near the edge. If you nudge the egg a little closer to the end of the table, not much will change. You can easily push it back to its original position and return the “egg-and-table- system” to its previous state.

Imagine now that after several nudges, the egg sits on the table, partly hanging over the edge. If you give it just one more tiny push past this “tipping point,” the egg will teeter over the edge and fall to the floor, making a big mess. The “egg-and-table-system” has been pushed beyond its tipping point, and is in a new state that cannot be returned to its previous condition.


Studies of past climates show that Earth’s climate system does not respond linearly to gradual CO2 forcing, but rather responds by abrupt change as it is driven across climatic thresholds. Modern climate is changing rapidly, and there is a possibility that Earth will soon pass thresholds that will lead to even larger and/or more rapid changes in its environments. Climate system behavior whereby a small change in forcing leads to a large change in the system represents a “tipping phenomenon” and the threshold at which an abrupt change occurs is the “tipping point.” [NRC]​
There have been rapid shifts to Earth’s climate in the past, and the current changes are accelerating past all previous rates of change in Earth’s history. For example, the shift from the last glacial period to the current warmer climate ended about 11,000 years ago. An abrupt transition occurred when 30% of the land surface changed from ice-covered to ice-free in just a few thousand years. Consider that in only a few hundred years, humanity has converted about 43% of the world’s land to agricultural or urban landscapes [Levitan].

There are a variety of possible tipping points. Increases in ocean acidity and rising ocean temperatures might reach a threshold that would precipitate the rapid loss of coral reef ecosystems and massive extinctions. The Amazon rainforest has been subjected to droughts of increasing severity, so much so that for periods of time it has been a source of atmospheric carbon rather than a “sink” that absorbs atmospheric carbon. The rainforest system is in danger of reaching a tipping point that will result in the widespread die-back of the trees and desertification of the region.

Climate records from Siberian caves suggest that 1.5° C (or 2.7° F) of warming would be enough to thaw permafrost, which covers 24% of the land surface of the northern hemisphere, and holds an estimated 17 trillion metric tons of organic carbon. The release of carbon dioxide and methane at this temperature is then a possible tipping point for continuous permafrost to start thawing and releasing vast quantities of greenhouse gases [Vaks].

The Greenland or West Antarctic ice sheets might have already crossed tipping points beyond which they are doomed to shrink and disappear altogether within a few centuries. James Hansen, one of the world’s leading climatologists, warned in 2008,


The warming that has already occurred, the positive feedbacks that have been set in motion, and the additional warming in the pipeline together have brought us to the precipice of a planetary tipping point. We are at the tipping point because the climate state includes large, ready positive feedbacks provided by the Arctic sea ice, the West Antarctic ice sheet, and much of Greenland’s ice. Little additional forcing is needed to trigger these feedbacks and magnify global warming. If we go over the edge, we will transition to an environment far outside the range that has been experienced by humanity, and there will be no return within any foreseeable future generation.​
Scientific studies published in 2014 suggest that the loss of some Antarctic glaciers may already be unstoppable, even with a complete cessation of greenhouse gas emissions [Carrington], [Goldenberg].

Thanks for clarification David. It is that "non-linear" nature of the crisis which gets so little main-stream attention. I am also seeing lots of people who think it is already too late and are "prepping". Hard to calculate what you would be "prepping" for, it seems to me. Or the city of Miami hoping to "mitigate" the effects of sea level rise- how much? By when?
You must log in or register to reply here.
Share:
Facebook Twitter Reddit Pinterest Tumblr WhatsApp Email Link
Top