Cows and Climate Change: Clearing Up the Confusion

In a rather strange of turn of events, Republicans opposed to the Green New Deal have made beef and hamburgers a core part of their messaging. It’s strange because while the Green New Deal resolutions do call for reducing emissions from agriculture, they make no explicit mention of beef.

The Green New Deal certainly isn’t designed to ban hamburgers. But then, maybe it’s not so surprising there’s a lot of confusion about this. After all the relationship between cows and climate change is probably one of the most misunderstood topics to come up frequently in discussions about climate policy. It doesn’t help that there’s a lot of misleading or blatantly inaccurate information floating around—some promoted by conservatives, but some of it propagated by the very people who actually do want to ban beef.

Among the general public there seems to be a vague understanding beef somehow contributes to climate change and that cow farts are in some way involved. Beyond that most people have no real idea of the real connection between cows and planet-warming carbon emissions. This seems like a good time to try and clear up some of the confusion.

When people talk about carbon emissions from beef and factory farming, they usually mean methane (CH4). Like CO2 methane is a heat-trapping, carbon-based molecule, but it differs from carbon dioxide in a couple important respects. On the plus side, it remains in the atmosphere for a much shorter than CO2 once it’s release. The bad news: it’s some 20-30 times more effective at trapping heat than CO2. This makes methane probably the second most important greenhouse gas.

There are two main sources of methane related to human activity. One is the fossil fuel industry; natural gas is actually just methane that’s been trapped underground for millions of years. When natural gas escapes before being burned—whether from leaky pipelines, fracking operations, or coal seams—it ends up in the atmosphere. That’s a big problem for the climate.

Fermentation occurs in oxygen-free environments—some natural, some engineered by humans. Those associated with humans include landfills (where garbage made of organic compounds is compacted underground without oxygen), flooded rice paddies (where plant material breaks down underwater), manure lagoons on factory farms...and the guts of ruminant mammals like cows. There’s no room here to get deep into the science behind it (and I’m no chemist), but suffice to say hoofed mammals are faced daily with the difficult task of digesting cellulose from vegetation they eat. They do this with the aid of microbes in their guts, and these microbes emit methane. Eventually this methane exits the animals—usually in burps, not farts (but farts make bawdier humor).

Ruminants have produced methane through this perfectly natural process for millions of years. The problem is humans have bred such huge numbers of cows they’ve helped swing the planet’s natural carbon cycle out of balance. Also, certain aspects of beef farming in general and factory farms in particular make these industries especially harmful to the climate.

If you’ve been paying close attention, you may have already noticed beef farming produces methane in two major ways: there’s cow burps, yes, but also cow manure. Manure from free-range cows can usually break down in an aerobic environment, producing little or no methane. But when cows are crammed into factory farms or feedlots their manure is disposed of in giant lagoons where it breaks down sans oxygen.

In other words, while raising cows inevitably produces methane, some methods are much worse than others. Another key variable has to do with what the cows are fed. For example, there’s evidence seaweed additives in cow feed can significantly reduce methane emissions from the animals’ bacterial flora.

So how big a problem is this?

If you go to lots of climate rallies (like I do), you’ll sooner or later see contingents of activists from groups like PETA marching behind banners like this: 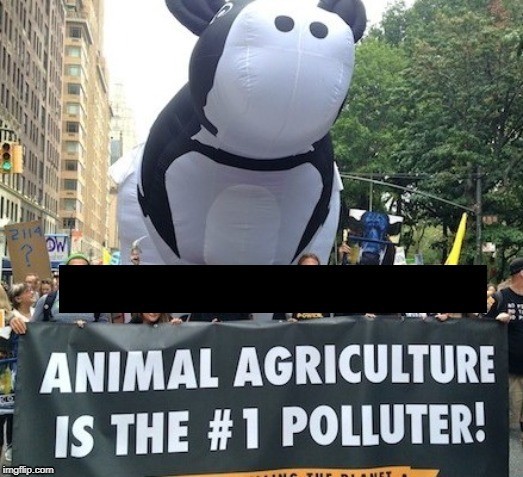 Cow banner at the People’s Climate March in New York
The statistic on the banner is apparently based on a study released in 2009 by the Worldwatch Institute, which claimed to show animal agriculture accounts for 51% of global climate pollution. Animal rights activists seized on this number and used it to claim the meat industry is an even bigger climate threat than coal and oil. Tellingly, few of these groups have any discernible political strategy to combat the structural causes of the climate crisis; they seem mainly interested in finding another talking point to convince people to go vegan. For the record I’m deeply concerned about the abuse of animals in factory farms (and I’m a vegetarian). But I don’t like the way organizations like PETA have misrepresented basic facts about climate science.

So what’s wrong with the “over 50%” number? The Worldwatch study arrived at it using what might be generously described as creative accounting. It’s debatable whether any assumptions in the study were downright false but some certainly made stretches in logic. For example, the authors’ definition of emissions from animal agriculture includes not just methane but things like emissions associated with treating zoonotic diseases. Presumably this means, among other things, fossil fuels burned to generate electricity used to power hospital lights and equipment.

While you can make a case for this methodology, it gets complicated fast. Because if we include the carbon footprint of treating foot-and-mouth disease under the heading of animal agriculture, shouldn’t we also expand transportation’s footprint to include treatment of asthma and other diseases associated with tailpipe emissions? What about power plant pollution, which also causes disease? At a certain point doesn’t it make more sense to say the carbon footprint of hospital equipment belongs to the electricity sector, which actually generates the energy? After all, if that electricity came from wind instead of fossil fuels its carbon footprint would go down dramatically.

The Worldwatch study is full of dubious methodology like this. I’m sure its authors had good intentions and probably never meant for their work to be quoted out of context the way it has been. Still, reading their report it’s hard to escape the impression its purpose isn’t to give a clear, honest picture of where carbon emissions come from, but rather to bump up the emissions that can be associated with a particular sector as much as humanly possible.

Let me be clear: there’s no denying animal agriculture is an important source of planet-warming pollution which needs to be addressed. But some exaggerated claims made about the industry are simply ridiculous. The nonsense got taken to a new level a several years ago by the popular but poorly researched documentary Cowspiracy, which used a combination of insinuation and shoddy journalism to imply not only is animal agriculture the biggest driver of climate change, but there’s a Big Green Plot among environmental groups to cover this fact up. According to the cowspiracy theorists, groups like Greenpeace secretly take money from the beef industry in exchange for keeping quiet about the climate impact of cows. There is absolutely no credible evidence to support this claim.

Making sense of it all

So to get back to where we started, there’s a lot of confusing or just plain wrong information floating around about animal agriculture and climate change. Enter conservative politicians, who thrive on vague and confusing information and have latched onto some of the cowspiracy theorists’ own talking points to claim curbing climate change inevitably means banning hamburgers. This in turn has sown even more confusion in the public mind about what reducing carbon emissions actually entails.

We absolutely need to have hard, honest conversations about how to address the climate impacts of animal agriculture—particularly factory farming, an industry which is highly problematic for lots of reasons other than fighting climate change. However, society’s ability to have these conversations isn’t helped by wacky cowspiracy theories or people showing up at climate rallies holding misleading banners in front of giant cow balloons. By most reasonable standards the number one cause of climate change is burning fossil fuels, not farming cows. It therefore makes sense dramatically cutting fossil fuel use should be the biggest and most urgent priority of proposals like the Green New Deal.