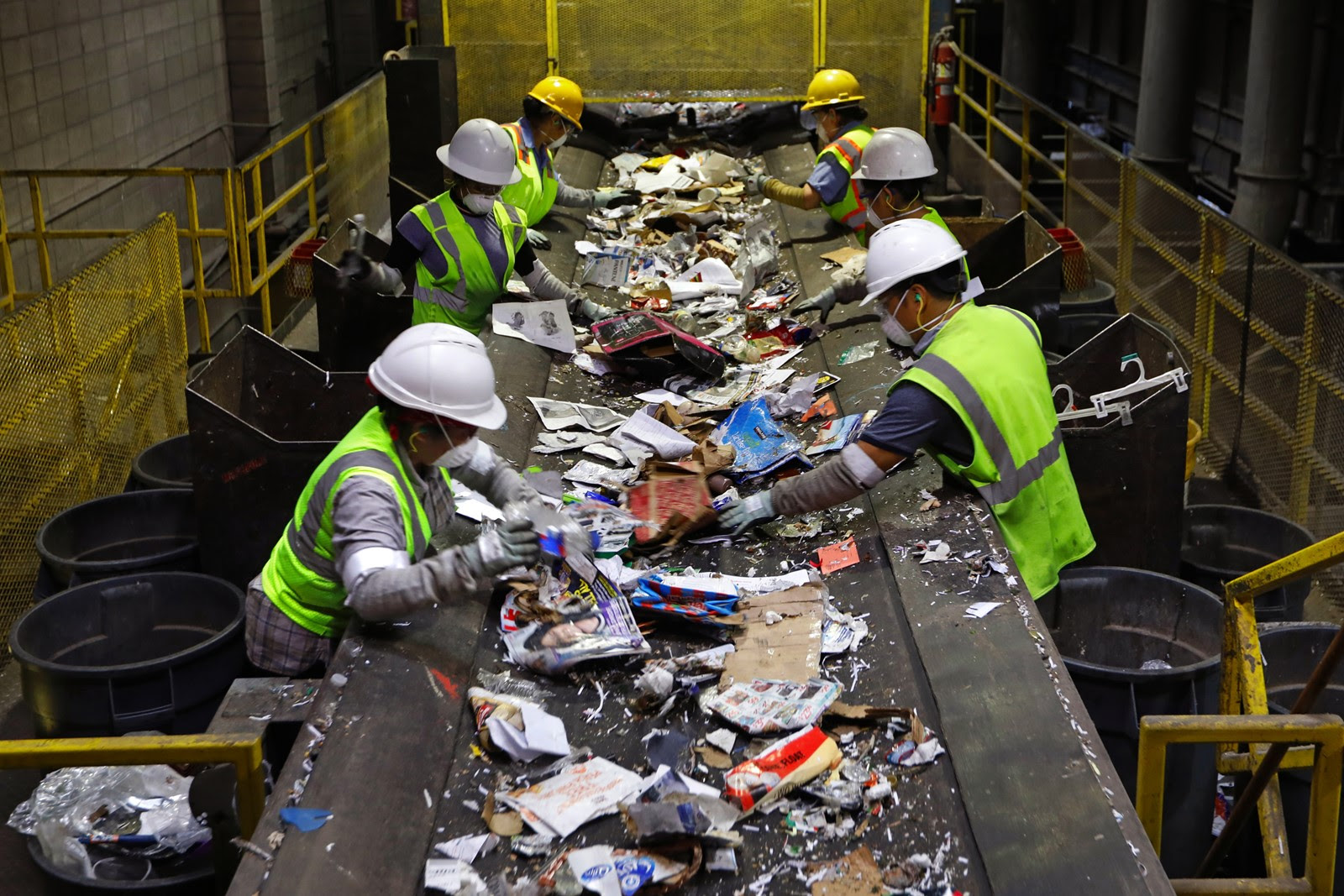 WORKERS AT the Burbank Recycle Center, which once earned $50,000 a month on recyclables. In the last year, the materials’ value has plunged so low that the center has paid up to $40,000 a month to get rid of them. (Photographs by Carolyn Cole Los Angeles Times) 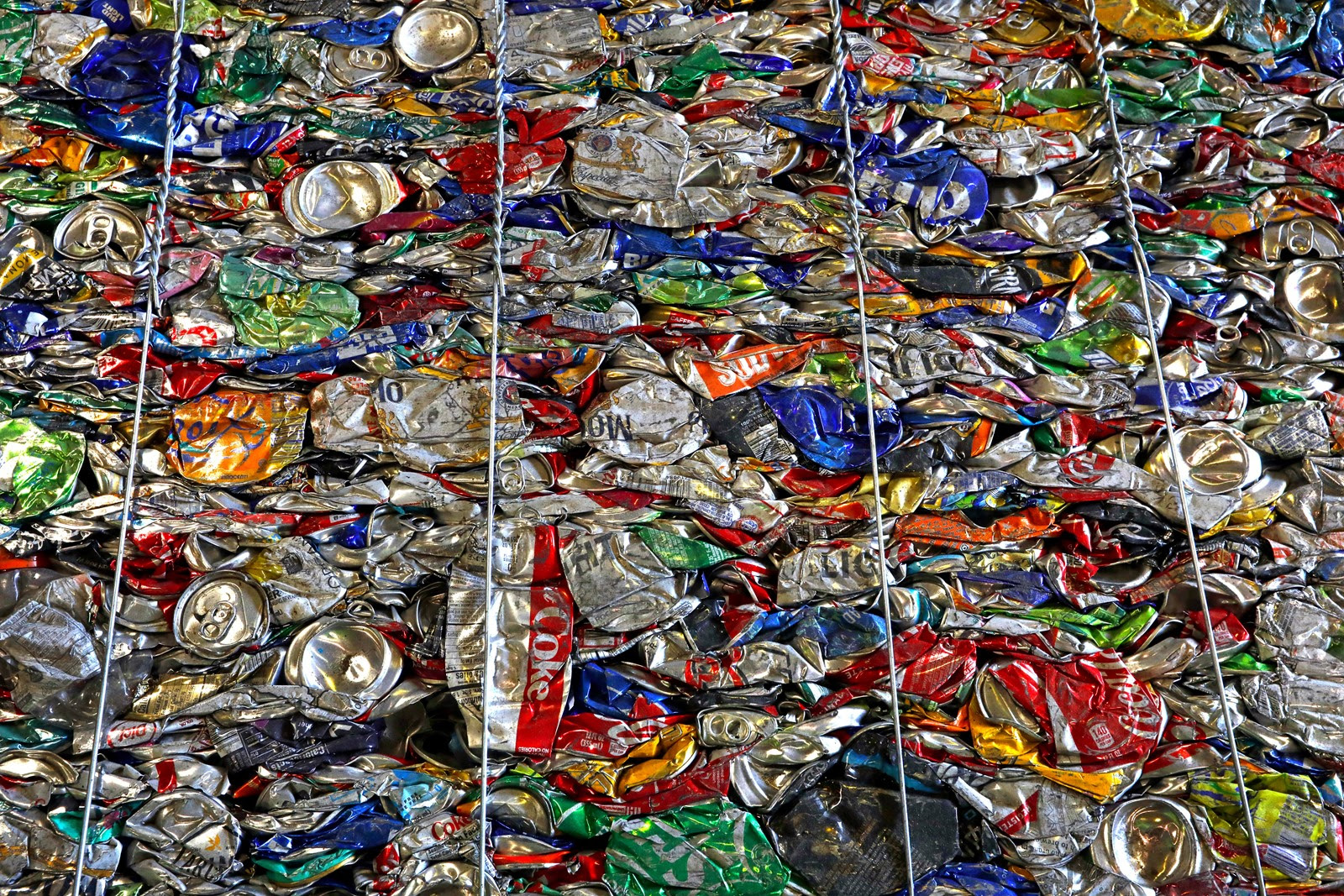 STRONG MARKETS remain for some recyclable materials such as aluminum, paper and cardboard. ()
BY PIPER MCDANIEL

“Our garbage tells our story,” said recycling coordinator Kreigh Hampel. “It drives home how disposable our lives are.”

Not long ago, these byproducts of a throwaway lifestyle found a market in China, allowing Americans to toss their garbage in recycling bins with a seemingly clean conscience. But in late 2017, China imposed a stringent ban on imports of certain scrap papers and plastics, creating a glut of material and roiling the global recycling industry.

Now, as still more Asian nations prepare to follow China’s lead, California’s recycling industry is struggling, posing hard choices for a state that prides itself on its image as an environmental beacon. A big hit came this month when RePlanet, California’s largest operator of recycling redemption centers, shut down and laid off 750 employees.

Consumers and industry alike will need to brace for big changes.

“The Chinese ban and everything else in the last couple of years made us realize we are living in a pretend world of ‘wishcycling,’ ” said Roland Geyer, an industrial ecology professor at UC Santa Barbara. “What we’ve tried hasn’t worked.”

To go beyond “wishcycling” — the assumption that everything in the blue bin gets recycled — consumers will need to change their purchase practices, avoiding single-use containers and packaging that have no recycling value, experts say. Industries that produce these products will need to be held responsible for their life-cycle impacts, possibly in the form of legislative mandates.

“We’ve always recognized that, for many materials, we’re going to have to have producer responsibility,” said Mark Murray, executive director of Californians Against Waste, a Sacramento conservation group. “That idea is not new.”

China started banning certain scrap imports partly because of complaints that the United States was shipping “contaminated” and poorly sorted recyclables, and also because of internal changes in the Chinese economy and waste management systems.

The shift has prompted increased investment in U.S. recycling plants to fill the void. Nonetheless, scrap waste is piling up in warehouses and parking lots. Some is ending up in waterways, oceans, landfills and incinerators. In nearly all cases, waste disposal is more expensive.

“It’s had a significant impact,” said Navnit Padival, senior engineer at the Los Angeles County Sanitation District. “The United States and the world over have been affected by China’s ban.”

The result: Companies that once turned a profit selling our used yogurt containers and water bottles now have accumulating piles of garbage and no place to sell it.

Within Los Angeles County alone, three recycling centers and two materials recovery facilities have closed since 2018, and as profits dwindle, many are operating at a loss and potentially risk closure.

About a decade back, the Burbank Recycle Center earned roughly $50,000 a month on recycled materials. In the last year, the value of recycled goods plunged so low that it was paying as much as $40,000 a month to outlets overseas just to get rid of the material. It’s gotten so expensive that the center is resorting to the landfill.

At the recycling center, the warehouse is dominated by a pile of material roughly the size of a house, which slowly moves onto a conveyor belt to begin an elaborate, multi-step sorting process. The machine song of the sorting line drowns out all other noises, as some 25 workers sort through the sun-faded plastic and broken bottles.

“We just don’t have a market for a lot of this stuff,” Hampel said. “We’re sending bales of plastic up to our landfill now and just burying it.”
A collapsed market also translates to higher rates for residents — because the trash haulers who pick up blue bins at the curb rely on profits to operate. Without that revenue, haulers are having to raise their prices. Republic Services, which provides hauling services nationally and within Los Angeles, has begun raising its average $4-$6 weekly rate by as much as $1.50 a week in some places.

While the industry stalls, residents and businesses are consuming and generating more waste than ever. In 2014, Los Angeles County generated approximately 22 million tons of waste. By 2018, that number had climbed to 30 million tons.

Some see the current crisis as a wake-up call about the realities — and limitations — of recycling.

Even during the days when China absorbed the bulk of American recyclables, much of what it purchased wasn’t actually recycled. After more desirable materials were gleaned, some of it was burned or sent to landfills, said David Colgan, director of communications at UCLA’s Institute of the Environment and Sustainability.

Even when a product is recycled, said Geyer, the UC Santa Barbara professor, its eventual destination is still a landfill. In the heyday of recycling, millions of tons of garbage still went to the landfill, and the production of virgin plastics increased at a steady rate alongside recycled products. Between 2010 and 2018, 36 landfills in California expanded and a new one opened.

At the same time, the number of CRV recycling centers — where the public can recycle bottles and cans in exchange for a refund — has been steadily declining statewide, with 996 closing since 2015, said Lance Klug, a spokesman for CalRecycle, a state agency.
The environmental cost comes in the form of methane gases emitted by landfills and the plastics and waste that end up in waterways, oceans and wildlands, often harming fish and wildlife.

“Plastic is already everywhere in the environment by now, and it will get more and more pervasive in higher concentrations and higher levels,” Geyer said.
Despite imminent gridlock, some say the situation calls for reform, not abandonment, of the recycling industry. The Los Angeles County Department of Public Works is unveiling a campaign to encourage people to keep their recyclables well-sorted and clean, which will reduce contamination and make the recycling process more efficient.

“A lot of people have built up good recycling habits in recent years, and we want them to keep up those habits,” said Coby Skye, assistant deputy director for environmental programs at the Public Works Department.

Still, researchers and environmental advocates emphasize that simple changes to recycling habits won’t be enough. The recycling industry itself leaves a footprint resulting from its industrial processes, and even at its most efficient, it doesn’t outweigh the waste produced.
“We need to stop looking at recycling as a primary solution to our waste problem,” said Colgan, of UCLA.

A focus onrecycling also shifts the burden to consumers, he said, while ignoring other avenues of sustainability, such as production and reuse.
In California, multiple reform bills are moving through the legislative process, including Assembly Bill 792, which would target beverage container producers by enforcing minimum requirements for recycled materials in production, and AB 1080, known as the California Circular Economy and Plastic Pollution Reduction Act, which would require that all single-use plastic products and packaging products in California be recyclable or compostable by January 2030.

Industry lobbyists have fended off previous legislative attempts to regulate single-use containers and may do so again.
“The transformational question before policymakers is ‘Who should be responsible?’ ” said Murray, adding that manufacturers want to maintain the status quo because they profit from continuing to buy cheap virgin materials with no disposal obligations.

In the recycling industry, strong markets remain for many goods, such as paper, cardboard, and aluminum. But there’s a growing volume of plastics and mixed plastics — things like plastic-coated cartons or potato chip bags — that no longer have a recycling value or never had one in the first place.
The path forward is uncertain.

“The U.S. is having a come-to-Jesus moment,” said Hampel, Burbank’s recycling coordinator. “Recycling is not going to undo the damage done by consumption.”